Babak Tafreshi, one of the ESO Photo Ambassadors, has captured the antennas of the Atacama Large Millimeter/submillimeter Array (ALMA) under the southern sky in another breathtaking image. The dramatic whorls of stars in the sky are reminiscent of van Gogh’s Starry Night, or — for science fiction fans — perhaps the view from a spacecraft about to enter hyperspace. In reality, though, they show the rotation of the Earth, revealed by the photograph’s long exposure. In the southern hemisphere, as the Earth turns, the stars appear to move in circles around the south celestial pole, which lies in the dim constellation of Octans (The Octant), between the more famous Southern Cross and the Magellanic Clouds. With a long enough exposure, the stars mark out circular trails as they move. The photograph was taken on the Chajnantor Plateau, at an altitude of 5000 metres in the Chilean Andes. This is the site of the ALMA telescope, whose antennas can be seen in the foreground. ALMA is the most powerful telescope for observing the cool Universe — molecular gas and dust, as well as the relic radiation of the Big Bang. When ALMA construction is complete in 2013, the telescope will have 54 of these 12-metre-diameter antennas, and twelve 7-metre antennas. However, early scientific observations with a partial array already began in 2011. Even though it is not fully constructed, the telescope is already producing outstanding results, outperforming all other telescopes of its kind. Some of the antennas are blurred in the photograph, as the telescope was in operation and moving during the shot. ALMA, an international astronomy facility, is a partnership of Europe, North America and East Asia in cooperation with the Republic of Chile. ALMA construction and operations are led on behalf of Europe by ESO, on behalf of North America by the National Radio Astronomy Observatory (NRAO), and on behalf of East Asia by the National Astronomical Observatory of Japan (NAOJ). The Joint ALMA

This image shows an aerial view of the Chajnantor Plateau, located at an altitude of 5000 meters in the Chilean Andes, where the array of ALMA antennas is located. The large antennas have a diameter of 12 metres, while 12 smaller antennas with a diameter of 7 metres make up the ALMA Compact Array (ACA). On the horizon, the main peaks from right to left are Cerro Chajnantor, Cerro Toco, and Juriques. This photo was taken in December 2012, four months prior to the ALMA inauguration. 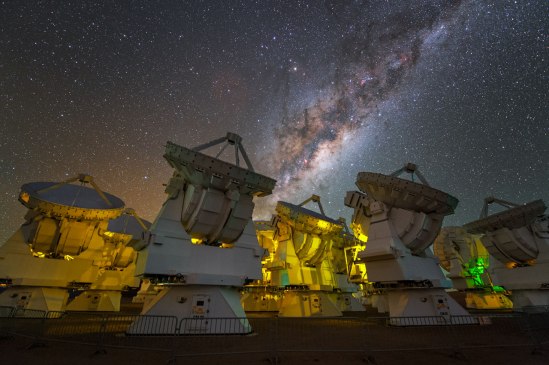 This colourful view of the ALMA array shows our Milky Way galaxy shining high above the antennas. The array lets astronomers address some of the deepest questions of our cosmic origins.

A panorama of ALMA at sunset. In the centre, the Moon can be seen. This image was taken during the ESO Ultra HD Expedition.

This view shows several of the ALMA antennas and the central regions of the Milky Way above. In this wide field view, the zodiacal light is seen upper right and at lower left Mars is seen. Saturn is a bit higher in the sky towards the centre of the image. The image was taken during the ESO Ultra HD (UHD) Expedition.

Antennas of the Atacama Large Millimeter/submillimeter Array (ALMA), on the Chajnantor Plateau, 5000m above sea level are seen in this UHD panorama. The Milky Way can be seen to stretch high above with Eta Carinae Nebula, a bright emission nebula, shown giving off its fiery red glow. Taken during the ESO Ultra HD Expedition.

This beautiful new image, taken during a time-lapse set at the Atacama Large Millimeter/submillimeter Array (ALMA) is another dramatic Ultra High Definition photograph from the ESO Ultra HD Expedition. ALMA, located at 5000 metres above sea level on the remote and empty Chajnantor Plateau in the Chilean Andes, marks the second destination for the four ESO Photo Ambassadors [1] on their 17-day trip. The ambassadors are equipped with state-of-the-art Ultra HD tools to help them capture the true majesty of sights like the one pictured here [2] [3]. Some of the 66 high-precision antennas that comprise ALMA are visible here, with dishes pointed aloft, studying the cold clouds in interstellar space, and peering deep into the past at our mysterious cosmic origins. The spectacular javelin of light over the ALMA array is a shooting star, slicing through the image in a vivid streak of colours. Emerald green, golden and faint crimson hues blaze brightly as the meteor burns up as it enters the Earth’s atmosphere and makes its fiery voyage across the sky. As the high-speed fireball — which is, in reality, a small grain of rock from interplanetary space — interacts with the atmosphere it heats up, vapourising the surface layers of the meteor, which are left behind in a glowing trail. These trails disappear in just a few seconds, but are captured here at the click of a button. The brightest star in the constellation of Virgo (The Virgin), known as Spica, and our neighbouring planet Mars glow brightly in the centre of the image — cosmic spectators to this fiery descent as they rise above the horizon. The Ultra HD Expedition began in Santiago, Chile, on 25 March 2014. This image was taken on the team’s eighth night on the Chajnantor Plateau. They are currently at La Silla Observatory, ESO’s first astronomical installation in Chile, and tomorrow, after one last night, they will finally make the long journey home. Free Ultra HD content gained from this expedition will so